How much does medical care cost? A searchable database of procedures in California billed to Medicare in 2011

How much does a hospital charge Medicare when you undergo a given procedure? Depends on where you go. Say you want a new pacemaker: At Cedars-Sinai Medical Center, the average bill in 2011 was about $140,496. But the U.C. San Diego Medical Center charged Medicare an average of $41,023 for the same procedure.

So how do you find out who is cheapest?

KPCC has created this searchable database that will allow you to compare the average charge for the 100 most frequently billed procedures paid under Medicare in 2011, which you can view by hospital or as a statewide average. It's based on data released in May by the Centers for Medicare and Medicaid Services as a way to make it easier for patients to comparison shop for hospital services by price.

A caveat: The data shows a wide variation in average bills, but experts note that the amounts billed have little bearing on what you actually pay. You will see that difference in the amount shown as the "average reimbursement" for a procedure, which is the average amount actually paid to the hospital. 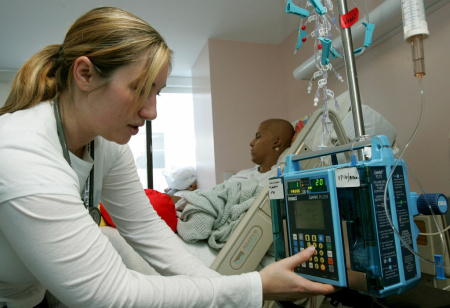 To use this database: Let's say you wanted to compare the average statewide bill for treatment of kidney disease. To search the database, select "Kidney & Urinary Tract" from the "Getting Started" menu, then choose from one of the diagnoses that match. Once you choose a category and a diagnosis, the data will show you charges and reimbursements in the state based on 1) overall average, 2) lowest and highest average charges and 3) difference. You can also compare the procedure between two hospitals to see how they compare on average charges and average reimbursement.

Choose from California hospitals that have performed these procedures by average bill and reimbursement amounts.