Police in Los Angeles County fatally shoot black people at triple their proportion in the population, an analysis by KPCC has found. The pattern is not repeated in any other racial group.

We don’t jump to conclusions based on a person’s race.

Police leaders said officers are trained to shoot only when they feel their lives or the lives of others are in danger — and that race has nothing to do with those decisions.

“We demand they not act in a biased manner,” LAPD Assistant Chief Michael Moore said. “We don’t jump to conclusions based on a person’s race.”

For some black people, the statistics confirm long-held suspicions about police.

“Look at what they did to Rodney King,” said Bobby Watkins, 50, of Rialto, whose stepson Dexter Luckett was unarmed when deputies fatally shot him in Bellflower.

Deputies thought Luckett, a 23-year-old black man, was grabbing a weapon when he reached for his waistband.

“We all know,” Anthony Jefferson, a friend of Luckett’s said. “These people”— police — “they will shoot.”

What’s wrong with this picture?

But police and others said those statistics are skewed only because law enforcement officers have more interactions with black residents than other racial groups.

Between 2010 and 2014, black people accounted for nearly 24 percent of those arrested, according to California Department of Justice data — mirroring the percentage of black people fatally shot according to KPCC’s analysis.

The arrest rate for Latinos is in line with their population in Los Angeles County - about 50 percent, according to the same data.

“When you step back and look at who are the offenders being arrested,” Moore, of the LAPD, said, “you have a disproportionate number.”

“It’s a complex question,” he said.

But in some instances, shootings occurred after police initiated contact with a person who committed no crime, including some of the most controversial local shootings. Ezell Ford, 25, was shot by LAPD officers who tried to stop him as he was walking in a gang neighborhood in South Los Angeles. He allegedly tried to grab an officer’s gun.

But she said the higher arrests are also a problem. For years, she’s argued police are overly aggressive in black neighborhoods.

Rice said she got an insight into police thinking more a decade ago, after officers at LAPD’s Rampart Division allegedly beat and robbed people they arrested. In the wake of the scandal, Rice was hired by the city to interview more than 800 LAPD officers to figure out how to reform the department.

It’s really striking to me how afraid they are of black men. My gut instinct – without any proof – says this is part of it, the subliminal implicit fears and biases.

She said they talked about black men being “super strong” and believed in a “King Kong” theory of black men on PCP having superhuman strength.

“It’s really striking to me how afraid they are of black men,” she said. “My gut instinct — without any proof — says this is part of it, the subliminal implicit fears and biases.”

Implicit bias by police has garnered enough attention that the California Commission on Peace Officer Standards and Training, which establishes training requirements, is planning a new class for officers on how to identify it in themselves.

Moore said new LAPD recruits are already trained to avoid acting on “mental shortcuts” they’ve picked up in their lives when they’re out on the job — including biases about black people.

“We discuss with them to recognize that we all carry our baggage of biases,” said Moore, a 34-year veteran of the department.

LAPD Sgt. Karoni Trahan grew up in Baldwin Village in south Los Angeles — an area known for its rows of low-slung apartment buildings nicknamed “the jungle” decades ago for their tropical foliage. It’s a crime-ridden neighborhood.

“I know that there is a fear of black men” by society in general, she said.

“I may not feel that because there’s history and there’s understanding that I have for them,” she added. “If I take off my uniform, I am what they are.”

Despite training against it, Trahan said she still hears some colleagues talk about black people in pejorative terms — not unlike the way she hears black friends talk about cops.

“You hear these stereotypes,” she said, “and they are not very positive on both sides.” 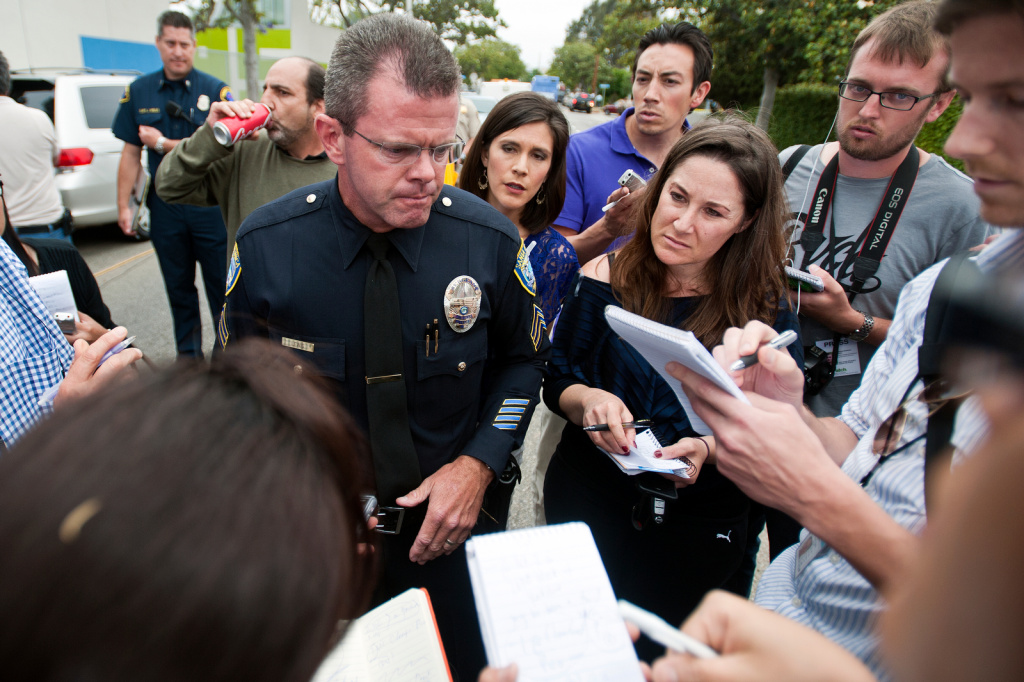 Law enforcement agencies aren't required to report data on police shootings, and few do. In California, a strong lobby and some of the nation's most restrictive laws make it hard for the public to know when officers use deadly force – and how top brass punish police for bad shootings.