A man using his toddler as a human shield during a gun battle with police. Another armed with automatic weapons on a rampage at Santa Monica College. A third man firing randomly at people near the busy intersection of Sunset and Vine in Hollywood — killing one and wounding two others.

These cases are among the hundreds of on-duty police shootings between 2010 and 2014 reviewed by KPCC — instances where officers risked their lives to stop dangerous felons. While public protests focus on the shooting of unarmed people — especially black men — most police shootings in those five years involved armed suspects.

There seems to be very little question in the public’s mind about whether officers’ actions were justified in situations such as those.

“I see heroes,” Los Angeles Police Chief Charlie Beck said at a ceremony last month in a ballroom at Hollywood and Highland.

Beck hung the department’s Medal of Valor on officers Eric Avendano and Miguel Ruano. In the audience, hundreds of officers, their wives, and city officers applauded.

In the summer of 2011, Ruano shot a man who had stabbed his partner inside a church in Boyle Heights — and was charging at Ruano.

Avendano’s decision to fire was not to save his own life, but that of an innocent woman.

“Right here in this room are the human stories of bravery,” Mayor Eric Garcetti said. “It is an honor to come here.”

Most officers will go their entire career without shooting someone. Out of more than 25,000 sworn police officers in Los Angeles County, fewer than 700 shot suspects in the five years reviewed by KPCC.

Avendano found himself in that tiny minority during his first year on the job.

He was working patrol with a training officer out of the Van Nuys Division when the car radio crackled with a call about an assault with a deadly weapon.

That’s a “pretty vague” call, said Avendano, 30. “It can be anything from somebody throwing a beer bottle at somebody to somebody armed with a bazooka.”

I realized if I didn’t do anything, she was going to die.

When they arrived, their patrol car lights illuminated Jeovany Mendoza, 18. He was 30 feet in front of them, holding a knife to his girlfriend’s bloody throat in a narrow alley off Saticoy Street, with apartment garages on one side and industrial buildings on the other.

“Drop the knife, put your hands up,” they yelled in English and Spanish as the woman cried hysterically, pleading for help.

Ninety percent of the time, an armed suspect will drop a weapon, Avendando said. Not this time.

“He states that he is going to kill her,” Avendano said. “I realized if I didn’t do anything, she was going to die.”

At police academies across California, cops are trained for these moments.

At first, recruits can be hesitant to shoot.

“We don’t want our officers to get shot at first,” said Sgt. Bobbie Riggs, a training sergeant with the LAPD who teaches recruits to get over their fear and pull the trigger.

They’re told to look for clues of a weapon: it starts with the call — did someone report gunfire? Then, are there bulges in the suspect’s pockets? Do they keep touching part of their clothing, as if to check on something concealed?

KPCC’s analysis found those clues don’t seem to be foolproof. Between 2010 and 2014, officers in Los Angeles County shot dozens of unarmed people who the officers thought were arming themselves — usually when they reached for their pants or waistband or when their hands were out of sight.

LAPD traffic officer Kevin Cotter, 57, said when his moment of truth came, there was no doubt.

On the morning of December 9, 2011, he was working on a movie set when a man started shooting indiscriminately at people at Sunset and Vine.

“The bottom line is you have an active shooter out here. You can’t let that continue,” Cotter recalled recently as he stood at the same corner.

He was just 12 feet away from the suspect when he fired. The shooting was not only found in policy, he was commended for it.

“It’s something that’s hard for any cop to do,” said Cotter, who shot the man along with Detective Craig Marquez. “We gave him every chance to give up.”

Avendano, the LAPD officer who was recently awarded the Medal of Valor, said after the suspect yelled that he was going to kill his girlfriend, his only concern was whether he would get a clear shot.

Avendano stepped out from behind his patrol car door and took aim. But there was a problem.

“Every time that I would raise my firearm, he would duck his head behind her,” he said.

His partner yelled again for the suspect, Mendoza, to drop the knife. Mendoza popped his head out.

“It was the best shot that I saw,” Avendano said. “When I took the shot, the victim let out a scream that I’ve never heard before and they both fell to the ground.”

For a second, Avendano wasn’t sure who he’d shot.

He hit his target. The bullet had traveled through the suspect’s eye and pierced his brain. Mendoza died on the spot.

“I could actually see my rounds leaving the gun and hitting the suspect,” he said during a recent interview.

I could actually see my rounds leaving the gun and hitting the suspect.

He met a reporter on Buford Ave. in Lennox, a working class and gang-ridden neighborhood that sits below Inglewood.

“I still have very vivid images of what occurred on this balcony,” Ingreso said.

It was 1996. Ingreso had only been working as a deputy for a year and he was chasing a suspect with a gun. As he turned a corner on a second story balcony, he witnessed the suspect shooting at his partner.

It had been almost 20 years since he stood at that spot and fired his weapon. He said it was the only time he’s had to.

“I would never welcome that again,” Ingreso said. “But if I had to do that again, I would. That’s my professional obligation.” 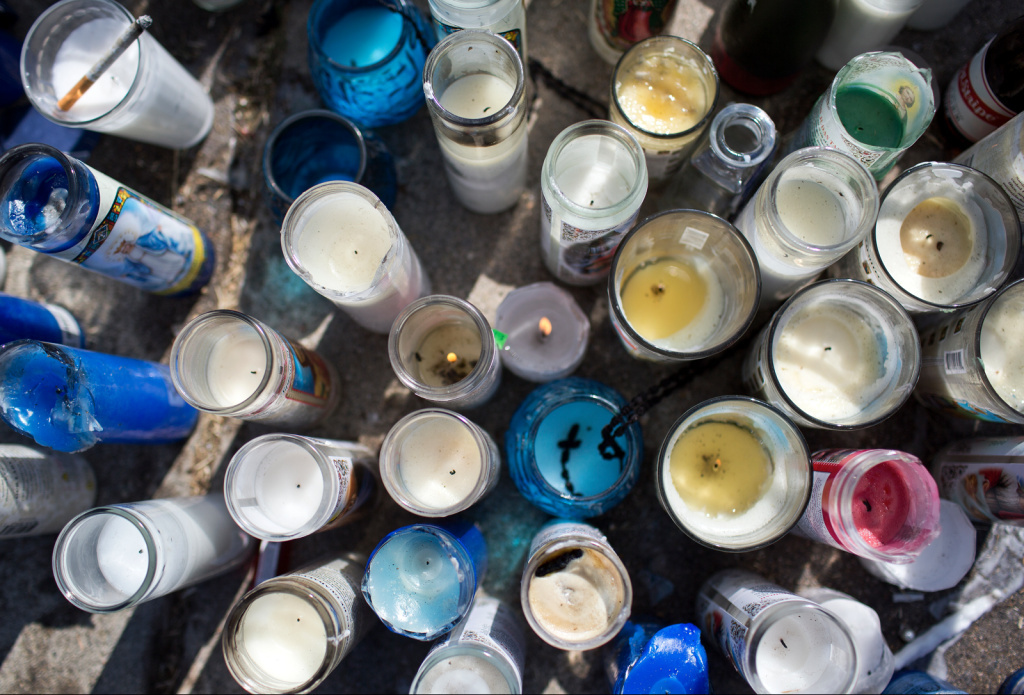 Black people were far more likely than members of other races to be shot by Los Angeles officers. They were also three times as likely to be arrested. Where some see racism, others see a community's complex history and relationship with police.